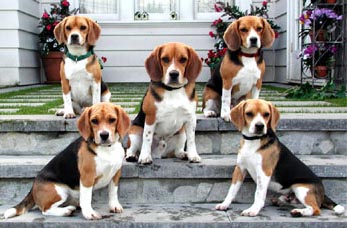 Jackpot was delighted when Boone’s Animal Actors of Hollywood chose two of our beagles for the filming of Hollywood blockbuster Cats and Dogs and for the sequel, Cats and Dogs II. Rio and Cooper (brothers) left for Hollywood at 8 months old. There, they were trained daily (each had a personal trainer who spent lots of quality time with him) and conditioned to be “in the pictures.”

You’ll see them both in the opening scene of Cats and Dogs (where all five beagles play in the barn), and both Rio and Cooper star (in different scenes) as the lead character, Lou.

Pictured above is the cast of Cats and Dogs. Cooper (Jackpot’s Rock and Roll Legend) is top left and Rio (Jackpot’s Rio) is bottom right. 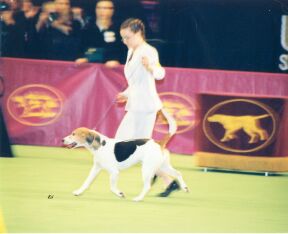 We also enjoyed watching junior handler Ashley Albro take our Harrier, Jaunty, all the way to the Group ring at the annual Westminster Dog Show at New York’s Madison Square Gardens, where they won Best Veteran in Show, and a loyal following.