In order to understand some of the very basic differences that led to the creation of Harriers and Beagles as hunting hounds, you must first know more about their intended quarry.

To most people, the terms “rabbits” and “hares” are interchangeable as they both conjure up images of cute, furry hopping critters with big ears.  However, in actuality they are quite different.  And it is these very differences that the two hound breeds were created to match.

While rabbits and hares are in the same order (lagomorpha) and family (leporidae); they differ in genus.  Rabbits are sylvilagus whereas hares are in the lepus classification.  In the US, wild rabbit varieties include the Eastern Cottontail, the New England Cottontail and the Swamp Rabbit.  The most common hare varieties are Snowshoe Hares, and the Black-Tailed, White-Tailed and Antelope Jackrabbits.
Both families are very fertile and reproduce easily and often, as Mother Nature requires of successful prey species.   Hares have young that are born fully furred with eyes open and ready to run.  They do not have burrows below ground but rather have shallow depressions on top of the earth where they hunker down overnight.  Hares tend to be bigger than rabbits, with larger ears, legs and rear feet.  On the other hand, rabbits give birth to blind, naked, helpless young in cozy fur-lined nests dug underground.

Beagles were developed to hunt rabbits, as they are a smaller, slower hound.  They pursue rabbits tirelessly, but not with excessive speed; when a rabbit is pushed too hard or fast it will bolt down a hole in a split second, thereby ending the chase.   Harriers were developed to be a perfect match for hares, which are larger and faster and without any burrows for escape.   Rabbits are overmatched with Harriers, and Beagles are usually too small to be very successful with the larger hares. 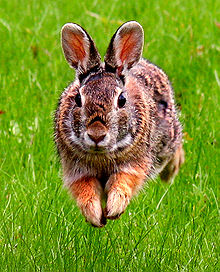 Hares and rabbits both tend to run in large circles when pursued, most covering several acres of their home territory.  When hunted, they don’t bolt for miles as do foxes or coyotes, but rather they will circle back to near where they started.   Through selective breeding, huntsmen created hounds that do the same thing when hunting – they circle back to the hunter in very large loops when searching for quarry.  “Foxhounds cast forward, harriers (and beagles) cast back” is an old huntsman’s adage, which is definitely true.  These characteristics were bred into the hounds to best match their quarry.

In the US, where most rabbit and hare hunting is done with a lone hunter, a shotgun and a couple hounds, this circling tendency is counted upon by the hunter to bag their bunny.  When the hounds are on a rabbit or hare and are speaking loudly, the hunter knows that the quarry will eventually circle back near where it started, so they try and position themselves to get a clear shot of the rabbit when it comes running back with the hounds in hot pursuit.

So now you know why Harriers and Beagles are the sizes that they are!